The accounting of Noah's Ark according to the Bible
Noah's Ark is not just a fairy tale that someone made up to entertain children. However, it is an accounting of one man who the Lord loved so much that He spared him, an accounting of how corrupt mankind became, so corrupt that the Lord felt that He had to destroy every one from off the face of the earth. However, the Lord had one man whom He chose to save, a man of complete faith who obeyed the Lord. Noah and his families part, and a promise from the Lord that he created a rainbow that would appear after the rain even to this day as a symbolic promise to mankind that He would never destroy the world in this way again. Scroll down to see bible verses about Noah's Ark.
God could see how wicked and evil man had become
And God saw that the wickedness of man was great in the earth, and that every imagination of the thoughts of his heart was only evil continually. Gen. 6:5
The Lord regretted making man so much His heart grieved
And it repented the Lord that he had made man on the earth, and it grieved him at his heart. Gen. 6:6
The Lord decided to destroy man in an effort to get rid of the wickedness and evil people
The Lord said, I will destroy man whom I have created from the face of the earth; both man, and beast, and the creeping thing, and the fowls of the air; for it repenteth me that I have made them. Gen. 6:7

Only Noah found Grace in the Lord's Eyes

God decided to destroy the earth but He did not want to destroy Noah because Noah was special in God's eyes and walked with God.
Noah found grace in the Lord's eyes
But Noah found grace in the eyes of the Lord. Gen. 6:8
Noah was just, perfect in his generations, and walked with God
These are the generations of Noah: Noah was a just man and perfect in his generations, and Noah walked with God. Gen. 6:9
Noah had three sons: Shem, Ham, and Japheth
And Noah begat three sons, Shem, Ham, and Japheth. Gen. 6:10
God could see the earth was corrupt and full of violence
The earth also was corrupt before God, and the earth was filled with violence. Gen. 6:11
And God looked upon the earth, and behold, it was corrupt; for all flesh had corrupted his way upon the earth. Gen.6:12
God told Noah that He is going to destroy the earth
And God said unto Noah, The end of all flesh is come before me; for the earth is filled with violence through them; and behold, I will destroy them with the earth. Gen. 6:13. Scroll down to read more. 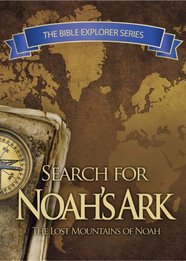 Search for Noah's Ark Series
God told Noah how to build the Ark
Make thee an ark of gopher wood; rooms shalt thou make in the ark, and shall pitch it within and without with pitch. Gen. 6:14
The length, width, and height of Noah's Ark
And this is the fashion which thou shalt make it of: The length of the ark shall be three hundred cubits, the breadth of it fifty cubits, and the height of it thirty cubits. Gen. 6:15
Noah's Ark had windows, doors, and was three stories high
A window shalt thou make to the ark, and in a cubit shalt thou finish it above; and the door of the ark shalll thou set in the side thereof; with lower, second, and third stories shalt thou make it. Gen. 6:16
God told Noah that He would destroy the earth and all flesh which has the breath of life in it by flood
And behold, I , even I, do bring a flood of waters upon the earth, to destroy all flesh, wherein is the breath of life, from under heaven; and every thing that is in the earth shall die. Gen. 6:17
Scroll down to read more.. 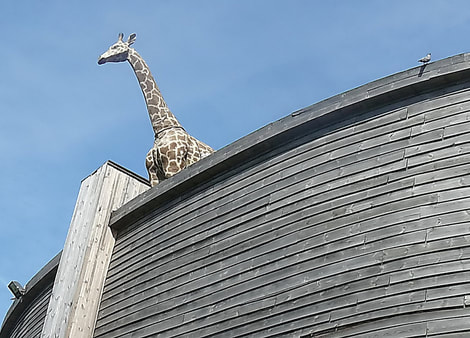 God made a covenant with Noah, his wife, and his descendants
But with thee will I establish my covenant; and thou shalt come into the ark, thou, and thy sons, and thy wife, and thy sons' wives with thee. Gen. 6:18
Noah instructed by God to bring two of every type of living flesh
And of every living thing of all flesh, two of every sort shalt thou bring into the ark, to keep them alive with thee; they shall be male and female. Gen. 6:19
The birds and animals came to Noah so he could keep them alive
Of fowls after their kind, and of cattle after their kind, of every creeping thing of the earth after his kind, two of every sort shall come unto thee, to keep them alive. Gen. 6:20
Noah instructed by God to bring food for them all
And take thou unto thee of all food that is eaten, and thou shalt gather it to thee; and it shall be for food for thee, and for them. Gen. 6:21
Noah obeyed God and did what God told him too
Thus did Noah; according to all that God commanded him, so did he. Gen. 6:22

Make thee an ark of gopher wood; rooms shalt thou make in the ark, and shalt pitch it within and without with pitch. Gen. 5:14 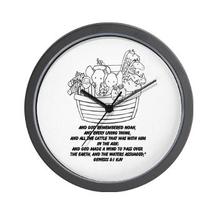 What other's are viewing