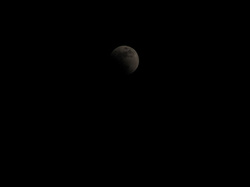 Four supernatural phenomena's that happened when Jesus died are:
(1) The darkening of the sun from the sixth until the ninth hour
It was dark for three hours while Jesus hung on the cross still alive before he cried out to God from the cross
Now from the sixth hour there was darkness over all the land unto the ninth hour. Matt. 27:45
Some scientists believe that this was an eclipse.

(2) The tearing of the temple curtain;
The Veil of the Temple was torn in half from top to bottom and there was an earthquake at the same time causing the rocks to tear into pieces.
And behold, the veil of the temple was rent in twain from the top to the bottom; and the earth did quake, and the rocks rent; Matt. 27:51
(3) The resurrection of dead saints;Graves opened and the saints rose out of them
And the graves were opened; and many bodies of the saints which slept arose, Matt. 27:52
The saints appeared to many people in the Holy city after Jesus Christ's resurrection
And came out of the graves after his resurrection, and went into the holy city, and appeared unto many. Matt. 27:53

(4) An earthquake, which may have indirectly caused the tearing of the temple curtain and resulted in the tombs of resurrected persons being opened.
And behold, the veil of the temple was rent in twain from the top to the bottom; and the earth did quake, and the rocks rent; Matt. 27:51


The Centurions which  were watching Jesus proclaim Him to be the  Son of God after seeing these four supernatural happenings.
Now when the centurion, and they that were with him, watching Jesus, saw the earthquake, and those things that were done, they geared greatly, saying Truly this was the Son of God. Matt. 27:54

Related Links
SOMETHING AWRY IN THE TEMPLE? THE RENDING OF THE
TEMPLE VEIL AND EARLY JEWISH SOURCES THAT REPORT
UNUSUAL PHENOMENA IN THE TEMPLE AROUND AD 30
by Robert l. plummer*