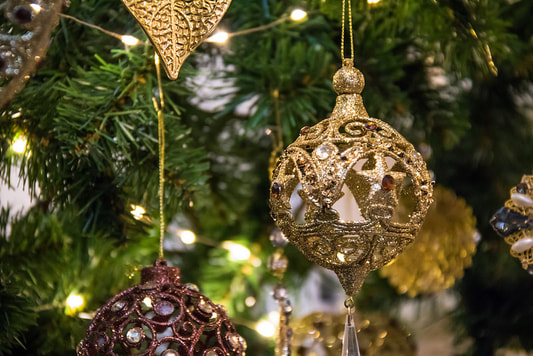 Christmas appears to be a time of family get together's, gift exchanges, Santa Claus, stocking filled with gifts and candy, mistletoe,  lots of food and merry making. It is also said to be a celebration of the birth of Jesus Christ even though Christmas was not celebrated for centuries after His birth and the Christmas customs were observed centuries before His birth in pagan rituals. There is also the unsettling fact that no birthdays of any of God's chosen were ever mentioned in the bible. The only mention of birthday celebrations in the bible were those of pagans. You may be surprised by the facts surrounding the Christmas celebration and Christ's birth.

There are many reasons Christmas is actually a pagan holiday and not an actual celebration of Christ's birth.
1. Pagan rituals: Most of the trimmings associated with Christmas-the tree, holly, mistletoe, and even St. Nick are steeped in religious pagan rituals. (See more below).
​2. The only people mentioned who celebrated birthdays in the Bible were known pagan worshippers.
3. December 25 has been historically celebrated as the Winter Solstice where humans were sacrificed. (See more below)
​4. Most Christmas customs were practiced and their origins actually predate the birth of Christ.
5. The only decorated tree mentioned in the bible was worshipped as a false God.
6. Date of Christ's Birth: The date of Christ's birth was no where near December 25 which is actually the date of the Winter Solstice celebration in which people were chosen and sacrificed to a false god. Christ's birth was actually closer to April 17. See More About the Date of Christ's Birth
Date of Christ's Birth

Christmas was not listed among the earliest festivals of the church

Christmas was not among the earliest festivals of the Church. Even Irenaeus and Tertullian omit it from their lists of feasts;
Origen, glancing perhaps at the discreditable imperial Natalitia, asserts (in Lev. Hom. viii in Migne, P.G., XII, 495) that in the Scriptures sinners alone, not saints, celebrate their birthday;
Arnobius (VII, 32 in P.L., V, 1264) can still ridicule the "birthdays" of the gods. Read more..   http://www.newadvent.org/cathen/03724b.htm

In 46 BC, Julius Caesar in his Julian calendar established December 25 as the date of the winter solstice of Europe (Latin: Bruma). Since then, the difference between the calendar year (365.2500 days) and the tropical year (~365.2421897 days) moved the day associated with the actual astronomical solstice forward approximately three days every four centuries, arriving to December 12 during the 16th century. In 1582, Pope Gregory XIII decided to restore the exact correspondence between seasons and civil year but, doing so, he did not make reference to the age of the Roman dictator, but to the Council of Nicea of 325, as the period of definition of major Christian feasts. So, the Pope annulled the 10-day error accumulated between the 16th and the 4th century, but not the 3-day one between the 4th AD and the 1st BC century. This change adjusted the calendar bringing the northern winter solstice to around December 22. Yearly, in the Gregorian calendar, the solstice still fluctuates a day or two but, in the long term, only about one day every 3000 years." Read more... https://en.wikipedia.org/wiki/Winter_solstice

How did Christmas come to be celebrated on December 25

Roman pagans first introduced the holiday of Saturnalia, a week long period of lawlessness celebrated between December 17-25.  During this period, Roman courts were closed, and Roman law dictated that no one could be punished for damaging property or injuring people during the weeklong celebration.
The festival began when Roman authorities chose “an enemy of the Roman people” to represent the “Lord of Misrule.”  Each Roman community selected a victim whom they forced to indulge in food and other physical pleasures throughout the week.
Romans murdered men & women as part of the festival
At the festival’s conclusion, December 25th, Roman authorities believed they were destroying the forces of darkness by brutally murdering this innocent man or woman." Read more... http://www.simpletoremember.com/vitals/Christmas_TheRealStory.htm

Featured Video: What You should know about christmas-the trumpet daily

The Truth About Christmas-Free Booklet >>>

The Truth about Christmas

"The truth is that all of the customs of Christmas pre-date the birth of Jesus Christ, and a study of this would reveal that, Christmas in our day is a collection of traditions and practices taken from many cultures and nations. The date of December 25th comes from Rome and was a celebration of the Italic god, Saturn, and the rebirth of the sun god. This was done long before the birth of Jesus. It was noted by the pre-Christian Romans and other pagans, that daylight began to increase after December 22nd, when they assumed that the sun god died. These ancients believed that the sun god rose from the dead three days later as the new-born and venerable sun. Thus, they figured that to be the reason for increasing daylight. This was a cause for much wild excitement and celebration. Gift giving and merriment filled the temples of ancient Rome, as sacred priests of Saturn, called dendrophori, carried wreaths of evergreen boughs in procession." Read more.. http://www.lasttrumpetministries.org/tracts/tract3.html

Origin of Christmas Part 2-How the sun god was changed to the sun of god?

Origin of the Christmas tree

The first tree that fits the description of a Christmas Tree is mentioned in the bible. Find out more about the origin of the Christmas tree here:

Another disturbing fact is that the actual date of Jesus Christ's birth is not mentioned anywhere in the bible. It seems if the Lord wanted us to celebrate Christ's birthday He would inspired the apostles of Christ to tell people this all important date and instruct them on what to do on this day just as He instructed Moses in the Ten Commandments to observe the Sabbath day and keep it Holy.