The origin of Christmas and the earliest recorded reference to Christmas as described by renowned Pastor David C. Pack may just shock you!

The Earliest Record of Christmas According to Pastor David C. Pack 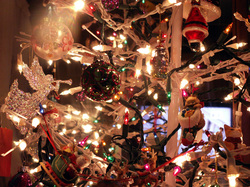 "Pastor David C. Pack is well known for his ability to teach the word of God as it is known that he once studied under Herbert W. Armstrong (who was considered a teacher before his time). Herbert W. Armstrong was said to have the gift of prophesy by many though some of his predictions did not happen the way he thought they would there is still much validity and truth to most of his teachings. For more information about Herbert W. Armstrong go to:
Herbert W. Armstrong/ Searchable Library. http://www.herbert-armstrong.org/
As a child we followed the biblical rules as set out by Herbert W. Armstrong, driving long distances from our home just to hear him and other's that taught what he believed to be the truth. I was taken to hear preacher's in Milwaukee, Wisconsin who taught Herbert W. Armstrong's teachings and we soaked up every Plain Truth magazine as if it were manna from heaven. After his death there appeared to be some dissension in the church and different members went their own ways to spread the word of God. David C. Pack is said to have been trained by Herbert W. Armstrong. David C. Pack is Pastor General of the Restored Church of Christ, and is a published author of numerous scholarly biblical articles including The Truth About Christmas.
The earliest  historical reference to Christmas was said to be more than 2 centuries after Jesus was born
"Nearly all aspects of Christmas observance have their roots in Roman custom and religion. Consider the following admission from a large American newspaper (The Buffalo News, Nov. 22, 1984): “The earliest reference to Christmas being marked on Dec. 25 comes from the second century after Jesus’ birth."-David C. Pack
Does the Bible say Jesus was born on Dec. 25?
No. In fact,  It does not.  In fact there seems to be no mention of Christmas trees, decorations, or even a date given. Read what the bible says about Jesus Christ's birth. Christmas has pagan roots as a day to worship the sun
"It is considered likely the first Christmas celebrations were in reaction to the Roman Saturnalia, a harvest festival that marked the winter solstice—the return of the sun—and honored Saturn, the god of sowing. Saturnalia was a rowdy time, much opposed by the more austere leaders among the still-minority Christian sect." -David C. Pack
Worshiping the Sun was supposedly replaced by worshiping the Son
"Christmas developed, one scholar says, as a means of replacing worship of the sun with worship of the Son. "-David C. Pack
Emperor Justinian made Christmas an official holiday
"By 529 A.D., after Christianity had become the official state religion of the Roman Empire, Emperor Justinian made Christmas a civic holiday. The celebration of Christmas reached its peak—some would say its worst moments—in the medieval period when it became a time for conspicuous consumption and unequaled revelry.” -David C. Pack The word Christmas originated hundreds of years after Jesus Christ was born
"The word for Christmas in late Old English is Cristes Maesse, the Mass of Christ, first found in 1038, and Cristes-messe, in 1131.
In Dutch it is Kerstmis, in Latin Dies Natalis, whence comes the FrenchNoël, and Italian Il natale; in German Weihnachtsfest, from the preceeding sacred vigil.
The term Yuleis of disputed origin. It is unconnected with any word meaning "wheel". The name in Anglo-Saxon wasgeol, feast: geola, the name of a month (cf. Icelandic iol a feast in December)." Read more... http://www.newadvent.org/cathen/08374c.htm
According to DAVID C. PACK the Catholic church did not recognize Christmas in the earliest festivals of the church
"Consider these quotes from the Catholic Encyclopedia, 1911 edition, under “Christmas”: “Christmas was not among the earliest festivals of the Church…The first evidence of the feast is from Egypt.” Further, “Pagan customs centering round the January calends gravitated to Christmas.” Under “Natal Day,” Origen, an early Catholic writer, admitted, “…In the Scriptures, no one is recorded to have kept a feast or held a great banquet on his birthday. It is only sinners (like Pharaoh and Herod) who make great rejoicings over the day on which they were born into this world” (emphasis mine)."-David C. Pack... Read more... ​http://www.thercg.org/books/ttooc.html
The  Truth About Christmas-Free Booklet >>>

List of holidays celebrated by Christians with detailed information about their origins and whether or not they are pagan.

Even though many Christian holidays are pagan people still insist on celebrating them. Some people think that there would be no fun if there were no holidays. However, there are real Holy Days that we as the Lord's servants should be observing. In order to know which ones we need to be observing we need to do some studying.