The Parable of the Prodigal Son Bible Study

Parable of the prodigal son 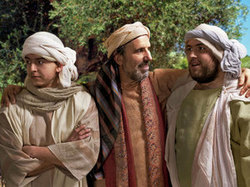 Free Bible images: Prodigal son
The Lord Loves Us. He is watching & waiting for His Children to Return to Him.
Jesus told the parable of the prodigal son but before he did he let the people know why He was telling this story which was to let them know when people repent of their sins the angels of God rejoice. Notice, they are not to busy to notice that just one person asked for forgiveness. He said:
Likewise, I say unto you there is joy in the presence of the angels of God over one sinner that repenteth Luke 15:10
Jesus told the story of the prodigal son to illustrate God's great attention and love toward us.
And he said, A certain man had two sons: Luke 15:11
The younger son came to his father one day asking for his share of their father's inheritance. His father did as he asked, divided the inheritance between the two sons and gave the younger son his half.
And the younger of them said to his father, Father, give me the portion of goods that falleth to me. And he divided unto them his living.Luke 15:12
The younger son squanders his inheritance

After receiving his share of his father's inheritance, the younger son went away to a far country and while he was gone he wasted all of his inheritance on parties. Soon the money was all gone.After he had spent all of the money a great famine (no food) came upon the land and the younger son could not get any food because he had no more money left. So he found someone to give him some kind of work and the person had him feeding pigs out in his fields.
And when he had spent all, there arose a mighty famine in that land; and began to be in want. Luke 15:14
And he went and joined himself to a citizen of that country; and he sent him into his fields to feed swine. Luke 15:15
The younger son became very hungry so he ate the husks that he was feeding to the swine because nobody would help him.
And he would fain have filled his belly with the husks that the swine did eat: and no man gave unto him. Luke 15:16
***Scroll down to read more, get your free printable version and free power point presentation of The Prodigal Son

The younger son got up and went home, he was surprised to see that his father was watching for him so the young man ran to his father falling on his neck and kissed him while apologizing for his behavior and telling his father he was not worth to be his son but his father disagreed and ordered his servants to bring the best robe, a ring, and shoes for his feet.
And he arose, and came to his father. But when he was yet a great way off, his father saw him, and had compassion, and ran, and fell on his neck, and kissed him. Luke 15:20
And the son said unto him, Father, I have sinned against heaven, and in thy sight, am no more worthy to be called thy son.Luke 15:21
But the father said to his servants, Bring forth the best robe, and put it on him; and put a ring on his hand, and shoes on his feet:Luke 15:22

The Older Son Gets Jealous of the prodigal son

The elder son who had been with his father all this time came out of the fields where he had been working and when he arrived he heard music and dancing so he asked a servant what was going on and the servant explained to him that the fatted calf had been killed to celebrate his younger brothers safe return and the elder son was very angry about this and did not go in where the celebration was.Soon his father came out to speak with him about it.
Now his elder son was in the field: and as he came and drew nigh to the house, he heard music and dancing. Luke 15:26
And he said unto him, Thy brother is come; and thy father hath killed the fatted calf, because he hath received him safe and sound. Luke 15:27
And he was angry, and wound not go in: therefore came his father out, and entreated him. Luke 15:28
His father asked him what was wrong and the son complained to his father asking him why he had never let him have a party with his friends when he was the faithful son whom had stood by him.
And he answering said to his father, Lo, these many years do I serve thee, neighter transgressed I at any time thy commandment: and yet thou never gavest me a kid, that I might make merry with my friends. Luke 15:29
But as soon as this thy son was come, which hath devoured thy living with harlots thou hast killed for him the fatted calf. Luke 15: 30

The Father says everything I have is yours! your brother was lost but now he is found!

﻿​​The father﻿ of the two sons justified his reaction to his prodigal son's return to the faithful son saying that it was appropriate to celebrate the return of his lost brother because in the eyes of the father the prodigal son was dead. When the prodigal son returned he was alive again so having been lost he was now found therefore it was right to celebrate his return.
Meaning of the message:
The Lord loves his children and He watches anxiously for them to return to HIM. There is joy in heaven in the presence of angels over one sinner which repents.
Likewise, I say unto you there is joy in the presence of the angels of God over one sinner that repenteth Luke 15:10
****Scroll down to view The Prodigal Son power point presentation ***
Save & Print It

After doing the reading part and viewing the power point presentation you can take this one minute pop quiz. It's easy-try it!

Likewise, I say unto you there is joy in the presence of the angels of God over one sinner that repenteth Luke 15:10

Check out the great power point presentation of The Prodigal Son that correlates with this bible study! Great for individuals, bible study groups and as sermon helpers!