The Parable of the Sower

Sowing Seeds-Where did your seeds fall? 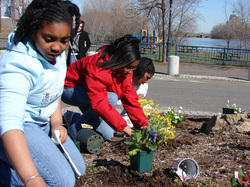 Spring is just around the corner. Many of us are making garden plans and deciding what seeds we want to plant. Jesus spoke about sowing seeds telling parables describing what happens when seeds are planted in different types of soil. He spoke of the Word of God as if it were a seed that could be planted in our hearts.
What does the bible say about "sowing seeds"?
People who "sow" bad things will "reap" bad things.Job 4:8
If you "sow" in tears you will "reap" joy.Psalms 126:5
People who sow the wind will reap the wind. It has no stalk and will yield no meal. Strangers will swallow it up.Hosea 8:7
What did Jesus say about "sowing" seeds?
Many times Jesus spoke in parables. One of these parables was the about sowing seeds.He told of a sower that went out to plant some seeds and the seeds fell by the wayside and birds came and ate them up.Matthew 13:3-4
Some seeds fell on stony ground that did not have much dirt and they sprung up but had no strong roots because of the stones and when the sun shined on them they withered away.Matthew 13:5-6
Some seeds fell in the thorns and when they sprung up the thorns choked them and the seedlings died.Matthew 13:7
However, other seeds fell on good ground and grew in abundance.Then Jesus said Who hath ears to hear, let him hear. Indicating that there was another meaning to the words that He was speaking. Matthew 13:8-9
.The disciples that were with Him, heard the parable asked Jesus why he spoke in parables when He spoke to the people. Matthew 13:10
Jesus told them that the meaning of His words was for the disciples to "know the kingdom of heaven" but it was not meant for those who did not believe in Him to understand the meaning of His words. Many people (non-believers) seen the miracles Christ performed and still did not believe;they heard his words but did not understand them.
Jesus answered them saying, "Because it is given unto you to know the mysteries of the kingdom of heaven, but to them it is not given.For whosoever hath, to him shall be given, and he shall have more abundance: but whosever hath not, from him shall be taken away even that he hath.Therefore speak I to them in parables: because the seeing see not; and hearing they hear not, neither do they understand." Matthew 13:11-13
Jesus pointed out that the people's hearts were  "waxed gross" or hardened and their eyes and ears were closed. If they opened them they would understand with their heart and would be converted and He would heal them. Matthew 13:15
Then Jesus told the disciples the meaning of the parables, Seeds that fell by the wayside are people who hear the word of the kingdom and do nothing with it because the wicked one comes and steals the seed that was sown in their heart.Matthew 13:19
Seeds that fell on stony ground are people that heard the word with joy and received it but were not rooted in the word of God. The first time something went wrong (during the period of trials and tribulations)they became "offended" and fell away (stopped believing).
Seeds that fell among the thorns are people that hear the word but get distracted by the cares and things of this world (like material things and money) become more important than the word of God. These people do not do not do anything with what they have learned. Matthew 13:22
Seeds that fell on good soil are people that hear the word, understand it, tell others, do the Lord's work and become productive.(bring forth fruit!) Matthew 13:23
Where did your seeds fall? Think about it.

But he that received seed into the good ground is he that heareth the word, and understandeth it; which also beareth fruit, and bringeth forth, some an hundredfold, some sixty, some thirty. Matthew 13:23