Biblical Origin of the Christmas Tree

A tree that bears a striking resemblance to Christmas trees is mentioned in the bible. Before tree stands existed, people would cut a tree from the forest and nail a cross to the bottom of it and nail it to the floor in their house. It was not uncommon to use candles as lights on the trees and to decorate them with silver and gold hand crafted ornaments. Christmas  trees have been around as long as most of us can remember but few really know the true origin of this famous tree. 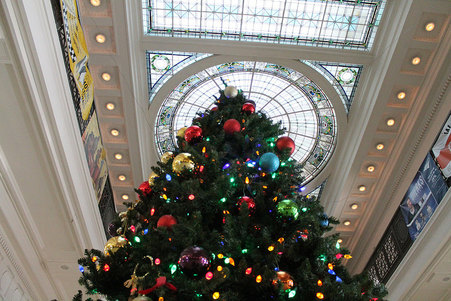 The only place in the bible that even remotely refers to a Christmas tree is in Jeremiah chapter 10 in which a tree cut down out of the forest, decorated, and feared was referred to by the Lord as false gods who cannot speak.
Christmas trees were worshiped as God's thousands of years before Christ's birth
Trees were cut from the forest and decorated with silver and gold. People worshiped these trees and were afraid of them even though the trees were motionless and could not speak. These false gods were not called Christmas trees until thousands of years after Christ's death.
The Holy Bible describes a Christmas tree hundreds of years before Jesus was born. No one seems to question the Pagan tree as symbolic of Jesus Birth. In fact, Christ was not born on Christmas day and the only mention of a decorated tree in the Bible is a pagan God that people worshiped because they were afraid of what it might do to them.
The only Bible verses that refer to a tree trimmed with gold and silver are found in Jerimiah
Jeremiah delivered a message to the Lord's people because they were worshiping false gods, in particular, a tree that was cut from the forest and decked with silver and gold.
Hear what the LORD says to you, people of Israel. Jer. 10:1
The Lord spoke out against the tree and told his people not to be afraid of the trees
This is what the LORD says: “Do not learn the ways of the nations or be terrified by signs in the heavens, though the nations are terrified by them. Jer. 10:2
The pagan practice of cutting down, decorating, and worshiping the trees is considered worthless practices by God
For the practices of the peoples are worthless; they cut a tree out of the forest, and a craftsman shapes it with his chisel. Jer.10:3
They adorn it with silver and gold; they fasten it with hammer and nails so it will not totter. Jer.10:4
Many people were afraid of the tree and feared what might become of them if they did not worship it
Like a scarecrow in a cucumber field, their idols cannot speak;they must be carried because they cannot walk. Do not fear them; they can do no harm nor can they do any good.” Jer. 10:5
People who worship false Gods considered senseless and foolish
No one is like you, LORD; you are great, and your name is mighty in power. Jer.10:6
Who should not fear you, King of the nations? This is your due. Among all the wise leaders of the nations and in all their kingdoms, there is no one like you. Jer. 10:7
They are all senseless and foolish; they are taught by worthless wooden idols. Jer. 10:8
The decorated tree
Hammered silver is brought from Tarshish and gold from Uphaz. What the craftsman and goldsmith have made is then dressed in blue and purple all made by skilled workers. Jer. 10:9
The Lord gets angry about false Gods
But the LORD is the true God; he is the living God, the eternal King.
When he is angry, the earth trembles; the nations cannot endure his wrath. Jer. 10:10
False Gods will perish from the earth
“Tell them this: ‘These gods, who did not make the heavens and the earth, will perish from the earth and from under the heavens." Jer. 10:11
God made the earth by his wisdom and understanding
But God made the earth by his power; he founded the world by his wisdom and stretched out the heavens by his understanding. Jer. 10: 12

For the customs of the people [are] vain: for [one] cutteth a tree out of the forest, the work of the hands of the workman, with the axe .Jer. 10:3

Christmas and most if not all of the trimmings and decorations have a dark origin, one that makes one wonder why our churches and Preachers never told us about this. Go to the Origin of Christmas
Pagan Origins of the Christmas Tree >>>