Saul Gives His Daughter to David for a Wife

Saul gives his daughter to David for a wife 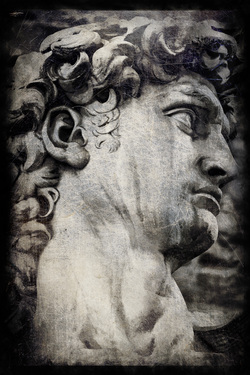 I Sam. 18:16-30
16 But all Israel and Judah loved David, and he went out and came in before them.      17Then Saul said to David, “Here is my older daughter Merab; I will give her to you as a wife, only be a valiant man for me and fight the LORD’S battles.” For Saul thought, “My hand shall not be against him, but let the hand of the Philistines be against him.” 18But David said to Saul, “Who am I, and what is my life or my father’s family in Israel, that I should be the king’s son-in-law?” 19So it came about at the time when Merab, Saul’s daughter, should have been given to David, that she was given to Adriel the Meholathite for a wife.
David Marries Saul’s Daughter
20Now Michal, Saul’s daughter, loved David. When they told Saul, the thing was agreeable to him. 21Saul thought, “I will give her to him that she may become a snare to him, and that the hand of the Philistines may be against him.” Therefore Saul said to David, “For a second time you may be my son-in-law today.” 22Then Saul commanded his servants, “Speak to David secretly, saying, ‘Behold, the king delights in you, and all his servants love you; now therefore, become the king’s son-in-law.’” 23So Saul’s servants spoke these words to David. But David said, “Is it trivial in your sight to become the king’s son-in-law, since I am a poor man and lightly esteemed?” 24The servants of Saul reported to him according to these words which David spoke. 25Saul then said, “Thus you shall say to David, ‘The king does not desire any dowry except a hundred foreskins of the Philistines, to take vengeance on the king’s enemies.’” Now Saul planned to make David fall by the hand of the Philistines. 26When his servants told David these words, it pleased David to become the king’s son-in-law. Before the days had expired 27David rose up and went, he and his men, and struck down two hundred men among the Philistines. Then David brought their foreskins, and they gave them in full number to the king, that he might become the king’s son-in-law. So Saul gave him Michal his daughter for a wife. 28When Saul saw and knew that the LORD was with David, and that Michal, Saul’s daughter, loved him, 29then Saul was even more afraid of David. Thus Saul was David’s enemy continually.
30Then the commanders of the Philistines went out to battle, and it happened as often as they went out, that David behaved himself more wisely than all the servants of Saul. So his name was highly esteemed.

This Page is under construction: Please excuse our mess.