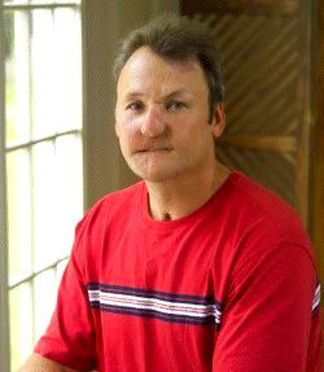 David Parnell. Photo from http://www.thesalemnewsonline.
​"David Parnell is a husband and father of seven from Tennessee. He is also a methamphetamine and suicide survivor, recovering addict and alcoholic, former drug dealer, and convicted felon.
​After spending 23 years addicted to drugs, he attempted suicide by shooting himself in the face with an SKS assault rifle.
​He has since devoted his life to educating others about the dangers of methamphetamine" (Anderson, K. 2018).

Featured Video: Blew off half of his face-David Parnell (Deliverance From Drugs)

ABOUT THIS VIDEO
David Parnell tried to commit suicide twice. The second time, he blew off half his face with an assault rifle and believes he visited hell. David believes that God saved him so he could help others who are on meth. See his amazing testimony and how Jesus Christ changed his life.

"They called him the 'miracle man' at the Nashville hospital where he'd been pronounced clinically dead. Following an afterlife experience where he briefly experienced hell, David woke up in the hospital, and he was changed forever, both physically and emotionally. In Facing the Dragon, you will witness the slow, agonizing metamorphosis of a good-looking high-school athlete into a violent, drug-dealing, psychotic wife-beater whose children were terrified of him. In graphic detail, you'll relive his suicide attempts and then walk alongside him as he endures countless surgeries to reconstruct his decimated face and learns how to cope with his hideous disfigurement. Now thirty-nine, Parnell is clean and sober and is making the most of the second chance he's been given, bringing his message about the dangers of meth and other drugs to schools, prisons, churches, and antidrug organizations around the world as a full-time lecturer. By experiencing the nightmare of his life―and his brief glimpse of hell―you will find hope and healing when facing your own life-threatening dragons".
Facing the Dragon: How a Desperate Act Pulled One Addict Out of Methamphetamine Hell

Why You Should Tell others Your Testimony

Your testimony can and most likely will change another persons life. We tell our testimony to other people so they can see that they are not alone and that they can be forgiven for the things they have done.  Testifying gives people hope that there is a chance for them. Sometimes while we are living in sin, life seems hopeless. When people who are not saved or new Christians who begin to doubt their salvation, (because the evil one tries to steal their sense of joy and peace)  hear a powerful testimony it can turn their lives around. Testimonies give hope to the hopeless and renew the faith of believers and followers of Christ
The only people who are unforgiven are those who do not ask for God's forgiveness.

What Happens After You Get Saved?

After we become saved we are filled with a hunger for the Word of God and a intense desire to tell everyone what our life was like and how the experience of accepting the Lord Jesus has changed our lives. This is the first step of witnessing for the Lord.
After Jesus was crucified He appeared to the 11 remaining disciples. They went to the mountain in Galilee as Jesus had told them. When the disciples saw him they began to worship Him because they were amazed that He had truly risen from the dead as He said that He would. There were some of them that doubted. Jesus told them, "All authority in heaven and on earth has been given to me. Go therefore and make disciples of all nations, baptizing them in the name of the Father and the Son and of the Holy Spirit., and teaching them to obey everything that I have commanded you. And remember, I am with you always, to the end of the age.
Read Matthew 28:16-20
Jesus tells us to tell others about Him (confess Him before men) and He will tell the Lord about us, (confess us to the Lord)
Read Matthew 10:32

From the end of the earth will I cry unto thee, when my heart is overwhelmed: lead me to the rock that is higher than I. Psalms 61:2

What happens when we die?

References:
Blew Off Half of His Face - David Parnell (Deliverance from Drugs) Hell Testimony. (2018). YouTube. Retrieved 8 April 2018, from https://www.youtube.com/watch?v=i4AwmOHnj-