Daniel's Prophecy of The End Times

The Babylonian army captured Daniel during his teen years in 605 BCE.He arrived in Babylon during Nabopolassar's reign and remained in service through the reign of five succeeding kings. Daniel was thrown into a lions den to be eaten. Daniel in the lions den became the ultimate story of faith. He was the only prophet described as beloved by God. Daniel became a member of the King's household, was castrated and lived there until his death at 90 years of age. Jesus spoke of Daniel's prophecies of the end times. In this prophecy Daniel describes four beasts that he has seen in his visions and the four beasts are revealed to be Kings and Kingdoms. Previously the King Nebuchanezzer had a similar dream. These dreams told of a time to come in the end times. The Chronological events of the Revelations relates directly with these prophecies in the Book of Revelations.

Daniel had a dream & visions

During the first year of the reign of Belshazzar the king of Babylon, Daniel had a dream and told what he dreamed of  telling of four winds that were upon the sea and four beasts who came out of the sea and each beast was different.
Read Daniel 7:1-3 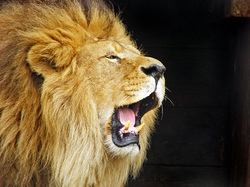 The first beast that Daniel seen in his dream appeared to him as a lion with eagle's wings. Daniel watched until the wings of the first beast were removed. The beast was removed from earth and stood on it's feet like a man and was given a heart.
Daniel 7:4.

Daniel describes the second beast as a bear that was raised up on one side and had three ribs between it's teeth in it's mouth. The angels told the beast to rise and eat much flesh.
Daniel 7:5.

Daniel describes the third beast as a leopard with four heads and four wings on it's back. This strange looking leopard was given dominion. Dominion means that the beast was given control or authority.

Daniel 7:6. After this I beheld, and lo another, like a leopard, which had upon the back of it four wings of a fowl; the beast had also four heads; and dominion was given to it.

Daniel describes a fourth beast that is different from the other beasts. It has iron teeth and it is so strong that it can crush things in it's path to dust. It has ten large horns and a small horn that has the eyes of a man and speaks.

Daniel 7:7-8. After this I saw in the night visions, and behold a fourth beast, dreadful and terrible, and strong exceedingly; and it had great iron teeth: it devoured and brake in pieces, and stamped the residue with the feet of it: and it [was] diverse from all the beasts that [were] before it; and it had ten horns. 8. I considered the horns, and, behold, there came up among them another little horn, before whom there were three of the first horns plucked up by the roots: and, behold, in this horn [were] eyes like the eyes of man, and a mouth speaking great things.

His garment was white as snow sitting on a fiery throne 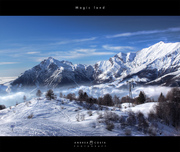 Daniel described someone with hair like wool and a white garment sat on a throne that looked like fire and had wheels that looked like a burning fire. A stream of fire came out in front of him and ten thousands times ten thousand stood before him and ministered to him  the judgement was set and the books were opened.
Daniel 7:9-10.

Great word were spoke from the horn and Daniel watched as the beast was killed and destroyed in a burning flame. All authority, power and dominion was taken away from the other beasts but they were allowed to live for a period of time.

The Son of man came and was given all authority 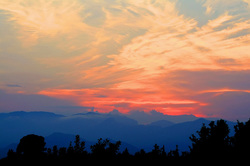 Daniel was grieved and the visions troubled him

Daniel was troubled by the visions so much so that his spirit suffered because of it. He went to someone that was near and asked for the truth and he told him the interpretation of these
Daniel 7:15-16.

The four beasts are four kings

The interpretation: the four beasts are four kings that will rise up but the Lord's saints will take the kingdom and possess it for ever.s
Daniel 7:17-18.

The fourth beast is the fourth kingdom on earth 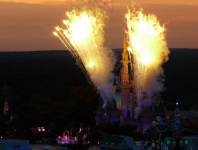 The fourth beast is different from the others. and will take away the authority and dominion will be taken from them and given to the fourth Kingdom which will be different from the other kingdoms and it will destroy the earth and break it into pieces. The ten horns out of this kingdom are ten kings and another that will come after them that will be different than the first three kings. This king will speak against God, wear out the saints and try to change times, laws and dividing of time.
Daniel 7:19-25.

The judgement will take away the authority of the other kingdoms

The judgement will take away the authority pr dominion of the other three kingdoms forever and the kingdom will be given to the saints of the Lord and everyone will serve and obey him.
Daniel 7:26-27.

Daniel 7:28. Hitherto [is] the end of the matter. As for me Daniel, my cogitations much troubled me, and my countenance changed in me: but I kept the matter in my heart.