The Trial of Jesus Christ Which Led to His Crucifixion

Jesus stood trial, was questioned by the governor, accused by chief priest and elders and yet made no defense for Himself. Bible verses Matt. 27:11-27. Watch our Featured video: The Pilate and The Trial.

The Trial of Jesus Christ 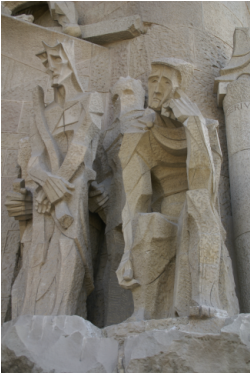 Jesus questioned by the governor
And Jesus stood before the governor: and the governor asked him, saying, Art thou the King of the Jews? And Jesus said unto him,
Thou sayest. Matt. 27:11
Jesus accused by the chief priests and elders
And when he was accused of the chief priest and elders, he answered nothing Matt. 27:12
Then said Pilate unto him, Hearest thou not how many things they witness against thee?
Jesus makes no defense for Himself
And he answered him to never a word; insomuch that the governor marvelled greatly. Matt. 27:14
The governor gives the people a choice between Barabbas and Jesus to be released
Now at that feast the governor was wont to release unto the people a prisoner, whom they would. Matt. 27:15
And they had then a notable prisoner, called Barabbas. Matt. 27:16
Therefore when they were gathered together, Pilate said unto them, Whom will ye that I release unto you? Barabbas, or Jesus which is called Christ? Matt. 27:17
The governor knew Jesus was innocent
For he knew that for envy they had delivered him. Matt. 27:18
The governor's wife warned him not to have anything to do with the trial of Jesus Christ
The governor's wife was warned in a dream
When he was set down on the judgment seat, his wife sent unto him, saying, Have thou nothing to do with that just man: for I have suffered many things this day in a dream because of him. Matt. 27:19
But the chief priest and elders persuaded the multitude that they should ask Barabbas, and destroy Jesus. Matt. 27:20
The governor asks the people to choose between Jesus and Barabbas and the people answered "Let him be Crucified"
The governor answered and said unto them, Whether of the twain will ye that I release unto you? They said, Barabbas. Matt. 27:21
Pilate saith unto them, What shall I do then with Jesus which is called Christ?They all say unto him, Let him be crucified. Matt. 27:22
And the governor said Why, what evil hath he done? But they cried out the more, saying, Let him be crucified. Matt. 27:23
When Pilate saw that he could prevail nothing, but that rather a tumult was mad, he took water, and washed his hands before the multitude, saying, I am innocent of the blood of this just person: see ye to it. Matt. 27:24
Then answered all the people, and said, His blood be on us, and on our children. Matt. 27:25
Then released he Barabbas unto them: and when he had scourged Jesus, he delivered him to be crucified. Matt. 27:26
Then the soldiers of the governor took Jesus into the common hall, and gathered unto him the whole band of soldiers. Matt. 27:27

Featured Video: The Pilate and The Trial

And when he was accused of the chief priest and elders, he answered nothing Matt. 27:12

Pilate Washes His Hands of the Trial of Jesus Christ

Go to Pilate Releases a Prisoner

The Crucifixion of Jesus Christ

Jesus Warned His Disciples of His Betrayal & Crucifixion

Jesus Christ Betrayed by Judas With A Kiss