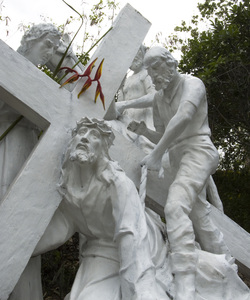 Now at that feast the governor was wont to release unto the people a prisoner, whom they would. Matt. 27:15
And they had then a notable prisoner, called Barabbas. Matt. 27:16
Therefore when they were gathered together, Pilate said unto them, Whom will ye that I release unto you? Barabbas, or Jesus which is called Christ? Matt. 27:17
For he knew that for envy they had delivered him. Matt. 27:18
When he was set down on the judgement seat, his wife sent unto him, saying, Have thou nothing to do with tha just man: for I have suffered many things this day in a dream because of him. Matt. 27:19
But the chief priests and elders persuaded the multitude that they should ask Barabbas, and destroy Jesus. Matt. 27:20
The governor answered and said unto them, Whether of the twain will ye that I release unto you? They said, Barabbas. Matt. 27:21
Pilate saith unto them, What shall I do then with Jesus which is called Christ?They all say unto him, Let him be crucified. Matt. 27:22
And the governor said Why, what evil hath he done? But they cried out the more, saying, Let him be crucified. Matt. 27:23
When Pilate saw that he could prevail nothing, but that rather a tumult was made, he took water, and washed his hands before the multitude, saying, I am innocent of the blood of this just person: see ye to it. Matt. 27:24
Then answered all the people, and said, His blood be on us, and on our children. Matt. 27:25
Then released he Barabbas unto them: and when he had scourged Jesus, he delivered him to be crucified. Matt. 27:26
Then the soldiers of the governor took Jesus into the common hall, and gathered unto him the whole band of soldiers. Matt. 27:27
​Home/Privacy Policy/Terms of Use/Mission Statement/Our Core Beliefs/Disclaimer/Free Bible Studies
​Prayer/Membership/Members Bible Study Group/Weekly study group/Our Great Commission/Inspiration/
Current Bible Study Series: End Times Bible Study/Faith Bible Study/Genesis Bible Study/Keys to Blessings Study/Parables Jesus Told Bible Study/Faith Bible Study/Forgiveness Bible Study/Raw Power Unleashed/Pride Bible Study/Origin of Christmas/Jealousy Bible Studies
Other websites by Rev. Penny Dean
​This website created by Rev. Penny Dean
Contact Us: lovethelordfirstministries@gmail.com
Love the Lord First Ministries 2016 Logo created using Logo Garden Logo Maker