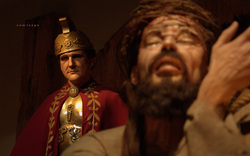 The governor asks the people to choose between Jesus and Barabbas and the people answered him
The governor answered and said unto them, Whether of the twain will ye that I release unto you? They said, Barabbas. Matt. 27:21
Pilate asked the people what he should do with Christ and the people said, "Let him be crucified"
Pilate saith unto them, What shall I do then with Jesus which is called Christ?They all say unto him, Let him be crucified. Matt. 27:22
And the governor said Why, what evil hath he done? But they cried out the more, saying, Let him be crucified. Matt. 27:23
Pilate washes his hands before the people to let them know he wanted no part of this
When Pilate saw that he could prevail nothing, but that rather a tumult was made, he took water, and washed his hands before the multitude, saying, I am innocent of the blood of this just person: see ye to it. Matt. 27:24
Then answered all the people, and said, His blood be on us, and on our children. Matt. 27:25
Then released he Barabbas unto them: and when he had scourged Jesus, he delivered him to be crucified. Matt. 27:26
Then the soldiers of the governor took Jesus into the common hall, and gathered unto him the whole band of soldiers. Matt. 27:27
And they stripped him, and put on him a scarlet robe. Matt. 27:28
And when they had plaited a crown of thorns, they put it upon his head, and a reed in his right hand: and they bowed the knee before him, and mocked him, saying Hail, King of the Jews! Matt. 27:29
And they spit upon him, and took the reed, and smote him on the head. Matt. 27:30