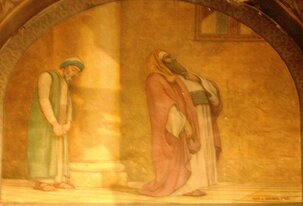 Photo used under creative commons license. Wikipedia (1)
Some people hold themselves in such high esteem that they feel that they are better than others. The Pharisee and the Publican is a parable told by Jesus to show that having the mindset, of thinking you are better than someone else, is very wrong. ​ Jesus told this parable of the pharisee and the publican (also known as the taxpayer) who came to pray. The pharisees prayers were selfish, bragging, and he even insulted the publican in his prayers. The publican sought only mercy from the Lord in his prayers. Jesus made it clear that whoever esteems themselves greater than someone else will be brought down from their "mightier than thou attitude", in fact, Jesus told the parable of the Pharisee and the Publican to the very people who held themselves in such high esteem. ​​Two men pray very different prayers
There were two men who went into the temple to pray. One was a Pharisee (priest)and the other a publican (taxpayer) The Pharisee's prayer was full of conceit, as he placed himself higher than other people and even insulted the publican who was also praying there. He did thank God but in so doing he insulted the publican and sinners because he exalted himself by implying that he is a better person than the publican, extortioners, unjust, and adulterers. ​The Pharisee started bragging to God about what he gives to God
During his prayer the Pharisee was saying aloud and basically bragging that he pays his tithes, thereby implying that he was more righteous or better than others because of this fact. The publican was humble during his prayer, beating his chest and asking God to be merciful to him because he was a sinner
The publican's prayer was very different from the Pharisee's because he was not concerned with material things of this earth, of being better than anyone else, his only concern was to plead with God to be merciful to him because admittedly he was a sinner, as we all are. Jesus clearly states that the publican would be justified
​ The publican would be justified, rather than the pharisee because everyone that puts himself higher than others will be abased (brought down) and everyone who humbles themselves before God will be exalted (brought up). Meaning of The Parable of The Pharisee & the Publican:
The meaning of the parable of The Pharisee and the Publican is clear: Whoever puts themselves higher than someone else will be brought down and whoever humbles themselves will be raised up in the eyes of God We are not to hold ourselves in such high esteem that we think we are better than other's.​

The Pharisee and Publican

References:
(1). Photo. The Pharisee and The Publican. Retrieved on Jan. 28, 2017 from Wikipedia. ​https://upload.wikimedia.org/wikipedia/commons/0/07/Pharisien_et_publicain.jpg