What Are The Dead Sea Scrolls? 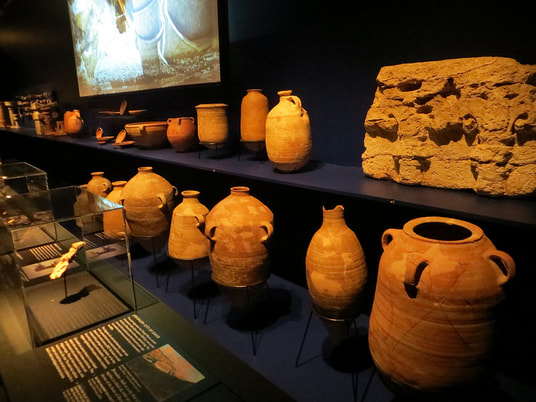 The Dead Sea Scrolls are "a number of leather, papyrus, and copper scrolls dating from c 100 b.c. to a.d. 135, containing partial texts of some of the books of the Old Testament and some non-Biblical scrolls, in Hebrew and Aramaic, and including apocryphal writings, commentaries, hymns, and psalms: found in caves near the NW coast of the Dead Sea beginning in 1947" (2).

When The Dead Sea Scrolls Were Written

"Most were written between 200 B.C. and the period prior to the failed Jewish revolt to gain political and religious independence from Rome that lasted from A.D. 66 to 70—predating by 8 to 11 centuries the oldest previously known Hebrew text of the Jewish Bible" (4).

How the Dead Sea Scrolls Were Originally Discovered

"In late 1946 or early 1947, Bedouin teenagers were tending their goats and sheep near the ancient settlement of Qumran, located on the northwest shore of the Dead Sea in what is now known as the West Bank. One of the young shepherds tossed a rock into an opening on the side of a cliff and was surprised to hear a shattering sound. He and his companions later entered the cave and found a collection of large clay jars, seven of which contained leather and papyrus scrolls. An antiquities dealer bought the cache, which ultimately ended up in the hands of various scholars who estimated that the texts were upwards of 2,000 years old. After word of the discovery got out, Bedouin treasure hunters and archaeologists unearthed tens of thousands of additional scroll fragments from 10 nearby caves; together they make up between 800 and 900 manuscripts" (1).

WHat is Contained in the dead sea scrolls

"The Dead Sea Scrolls comprise a vast collection of Jewish documents written in Hebrew, Aramaic, and Greek, and encompassing many subjects and literary styles. They include manuscripts or fragments of every book in the Hebrew Bible except the Book of Esther, all of them created nearly one thousand years earlier than any previously known biblical manuscripts. The scrolls also contain the earliest existing biblical commentary, on the Book of Habakkuk, and many other writings, among them religious works pertaining to Jewish sects of the time. The legends of what was contained in the Dead Sea Scrolls are far beyond what was actually there. There were no lost books of the Bible or other literature that there was not already other copies of. The vast majority of the Dead Sea Scrolls were simply copies of books of the Old Testament from 250-150 B.C. A copy or portion of nearly every Old Testament book was found in Qumran. There were extra-biblical and apocryphal books found as well, but again, the vast majority of the scrolls were copies of the Hebrew Old Testament. " (3).
"The scrolls also contain a collection of previously unknown hymns, prayers, commentaries, mystical formulas and the earliest version of the Ten Commandments" (4). ​