John the Baptist Beheaded at a Birthday Party
Matt. 14:1-14

John the Baptist beheaded at a birthday party 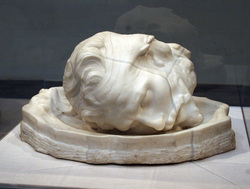 At that time Herod the te'-trach heard of the fame of Jesus. Matt. 14:1
And said unto his servants, This is John the Baptist; he is risen from the dead; and therefore mighty works do show forth themselves in him. Matt. 14:2
For Herod had laid hold on John, and bound him, and put him in prison for Hero'-di-as' sake, his brother Philip's wife. Matt. 14:3
For John said unto him, It is not lawful for thee to have her. Matt. 14:4
And when he would have put him to death, he feared the multitude, because they counted him as a prophet. Matt. 14:5
But when Herod's birthday was kept, the daughter of Hero'-di-as danced before them, and pleased Herod. Matt. 14:6
Whereupon he promised with an oath to give her whatsoever she would ask. Matt. 14:7
And she, being before instructed of her mother, said, Give me here John Baptist's head in a charger. Matt. 14:8
And the king was sorry: nevertheless for the oath's sake, and them which sat with him at meat, he commanded it be given her. Matt. 14:9
And he sent, and beheaded John in the prison. Mat. 14:10
And his head was brought in a charger, and given to the damsel: and she brought it to her mother. Matt. 14:11
And his disciples came, and took up the body, and buried it, and went and told Jesus. Matt. 14:12
When Jesus heard of it, he departed thence by ship into a desert place apart: and when the people had heard thereof, they followed him on foot out of the cities. Matt,14:13
And Jesus went forth, and saw a great multitude, and was moved with compassion toward them, and healed their sick. Matt. 14:14
Jesus feeds five thousand men + women and children
After Jesus hear about John the Baptist he left the city, healed the sick and fed five thousand men plus women and children with five loaves of bread and two fish.
Matt. 14:13-21

Find out more about John the Baptist: Men in the Bible

John the Baptist is well known for baptizing Jesus Christ and for eating locusts and honey as his primary diet, however there is much more to be known about this remarkable man.

What the Bible Says About Birthday's

You might be shocked at what the bible reveals about birthdays!

Find out what happened at the Pharaoh's birthday celebration: