Feeding the five thousand bible study. Jesus Christ was a living example for us to follow during His short time on earth. Everything He did and said had a very important meaning. 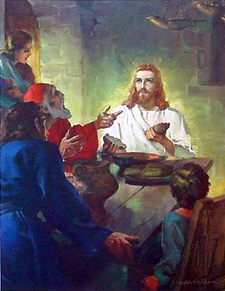 Jesus feeds five thousand + women and children (Matt. 14:13-24)
Jesus is the way the truth and the life, we cannot get to the Father unless we go through Jesus Christ.
Jesus answered, "I am the way and the truth and the life. No one comes to the Father except through me.John 14:6
He said "Follow me" so this means Jesus is the example we need to follow and when we do He will make us fishers of men.
And he saith unto them, Follow me, and I will make you fishers of men. Matt. 4:19
When Jesus Christ fed five thousand plus women and children he blessed the loaves and fishes before passing them out, He gave us a simple example to follow. We should pray for the Lord to bless our food before eating it.
Jesus heals the sick
Jesus left and many people followed him out of the cities. Jesus felt compassion for these people and healed the sick people among them.
When Jesus heard of it, he departed thence by ship into a desert place apart: and when the people had heard thereof, they followed him on foot out of the cities. Matt. 14:13
And Jesus went forth, and saw a great multitude, and was moved with compassion toward them, and he healed their sick. Matt. 14:14
Jesus feeds five thousand people with five loaves of bread and two fish
And when it was evening, his disciples came to him, saying, This is a desert place, and the time is now past; send the multitude away, that they may go into the villages, and buy themselves victuals. Matt. 14:15
But Jesus said unto them, They need not depart; give ye them to eat. Matt. 14:16
And they say unto him, We have here but five loaves, and two fishes. Matt. 14:17
He said, Bring them hither to me. Matt. 14:18
Jesus prays and blesses the food before the disciples gave it to the people
And he commanded the multitude to sit down on the grass, and took the five loaves, and the two fishes, and looking up to heaven, he blessed, and brake, and gave the loaves to his disciples, and the disciples to the multitude. Matt. 14:19
All of the people ate, were full and there were still 12 baskets left over
And they did all eat, and were filled: and they took up of the fragments that remained twelve baskets full. Matt. 14:20
And they that had eaten were aobut five thousand men, beside women and children. Matt. 14:21
Jesus sent the multitude away
And straightway Jesus constrained his disciples to get into a ship, and to go before him unto the other side, while he sent the multitudes away. Matt. 14:22
And when he had sent the multitudes away, he went up into a mountain apart to pray: and when the evening was come, he was there alone. Matt. 14:23
But the ship was now in the midst of the sea, tossed with waves: for the wind was contrary. Matt. 14:24
Jesus walks on Water
In the midst of the turbulent waves and wind Jesus Christ walked on water.

Memory Verse:
Jesus answered, "I am the way and the truth and the life. No one comes to the Father except through me. John 14:6